Founders of Women’s Environmental Institute, one of Mill City Farmers Market’s year-round vendors, share the 20-year “herstory” of the certified organic farm and orchard and it’s unique role as a non-profit in Minnesota farming.

“We are a farm, but we are more than a farm,” says Jacque Zita, Director of Education and Operations & Farm Manager of the Women’s Environmental Institute (WEI). “People don’t know us as a nonprofit social justice org. They’re supporting good food for themselves and good pay for our farmers. But also, it supports our mission work and our educational work — environmental, agriculture and food justice.”

Patrons of the Mill City Farmers Market may be familiar with the Amador Hill Farm and Orchard — WEI’s farm program about an hour north of us in North Branch, Minnesota. But, as Jacque says, WEI encompasses so much more than a farm.

WEI grew out of the dreams of Jacque and her partner, Karen Clark, now the Activist Executive Director. At the time in 2002, Jacque was a professor in the department of Gender, Women’s, and Sexualities Studies at the University of Minnesota, and Karen was a member of the Minnesota State House of Representatives, serving South Minneapolis. A formidable team, they and their communities were turning their attention and efforts to environmental justice, a movement that connects environmentalism with social justice issues. An idea forming, they found a plot of land. 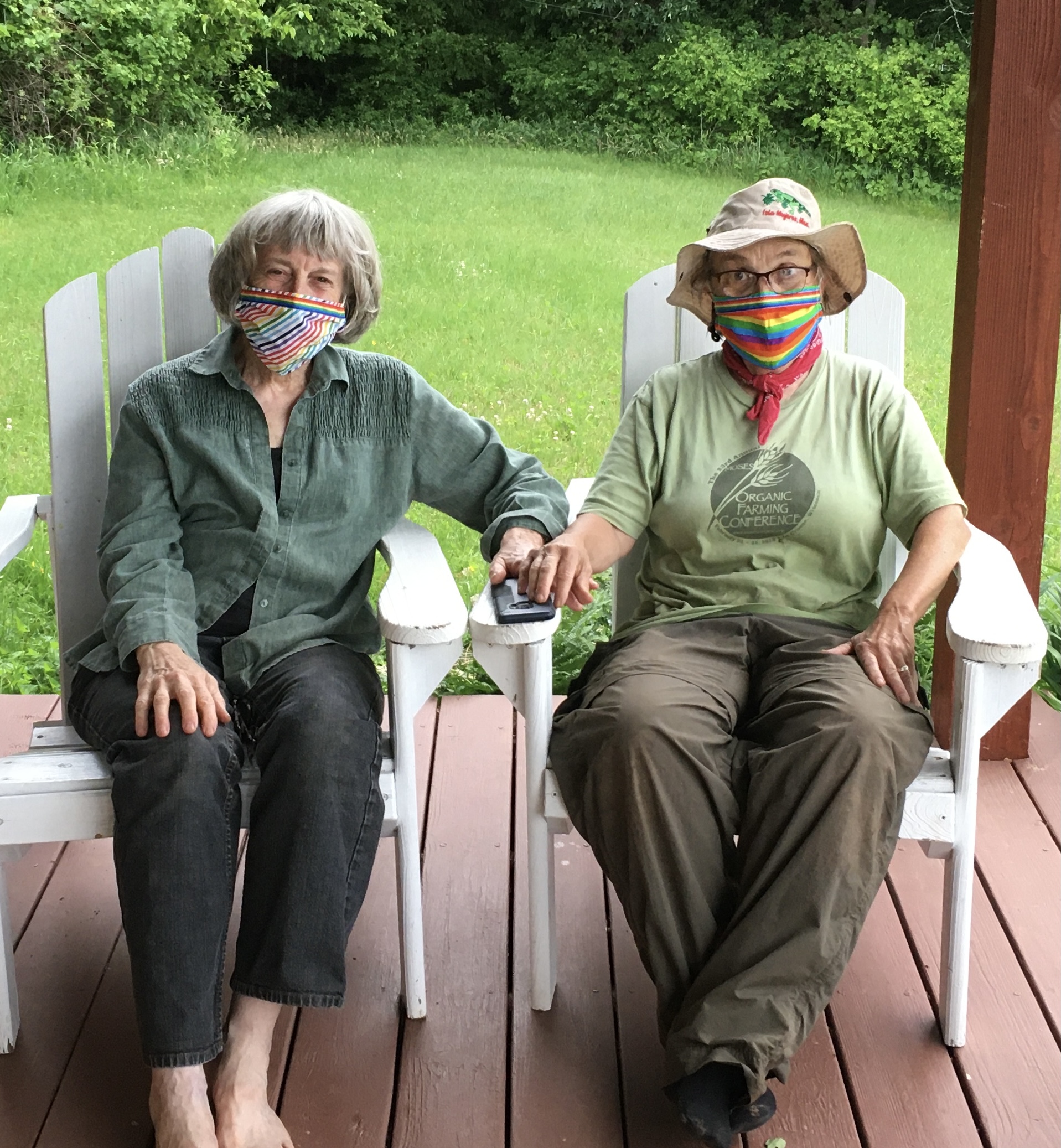 “It had a decrepit orchard, with the weeds halfway up the trees,” says Karen. “But Jacque, in her usual visionary zeal said, ‘Look at that orchard! We could make it into an organic orchard.’”

In November of 2003, sitting on the floor of what is now the Eco-Retreat center, furnished with a coffee pot and enthusiasm, WEI had their first board meeting. They came up with their mission statement: WEI is a place for women and allies to renew, learn, and organize for environmental justice.

Nearly 20 years later, the nonprofit has grown to include programs in education, community empowerment, at their eco-retreat center, and in environmental justice research and advocacy. Both now retired from their former professions, Karen and Jacque use their skill sets to continue WEI’s mission. They host classes and community events at the institute. With down-to-earth sustainability and justice education, Jacque continues to teach, but now with and through the land, rather than in a classroom. Karen does much of her work in the Twin Cities, working to make urban agriculture more accessible and sustainable through public policy.

And, of course, they have their farm program — the Amador Hill Farm and Orchard. Producing over 150 varieties of organic produce, the farm supports and works in tandem with WEI’s other programming. The connection of urban and rural communities through farming is crucial to how WEI envisions the future. In addition to selling produce at the Mill City Farmers Market, they distribute through CSA boxes in the cities and a program called Veggie RX in their north-central Minnesota communities, delivering boxes of food to local clinics. 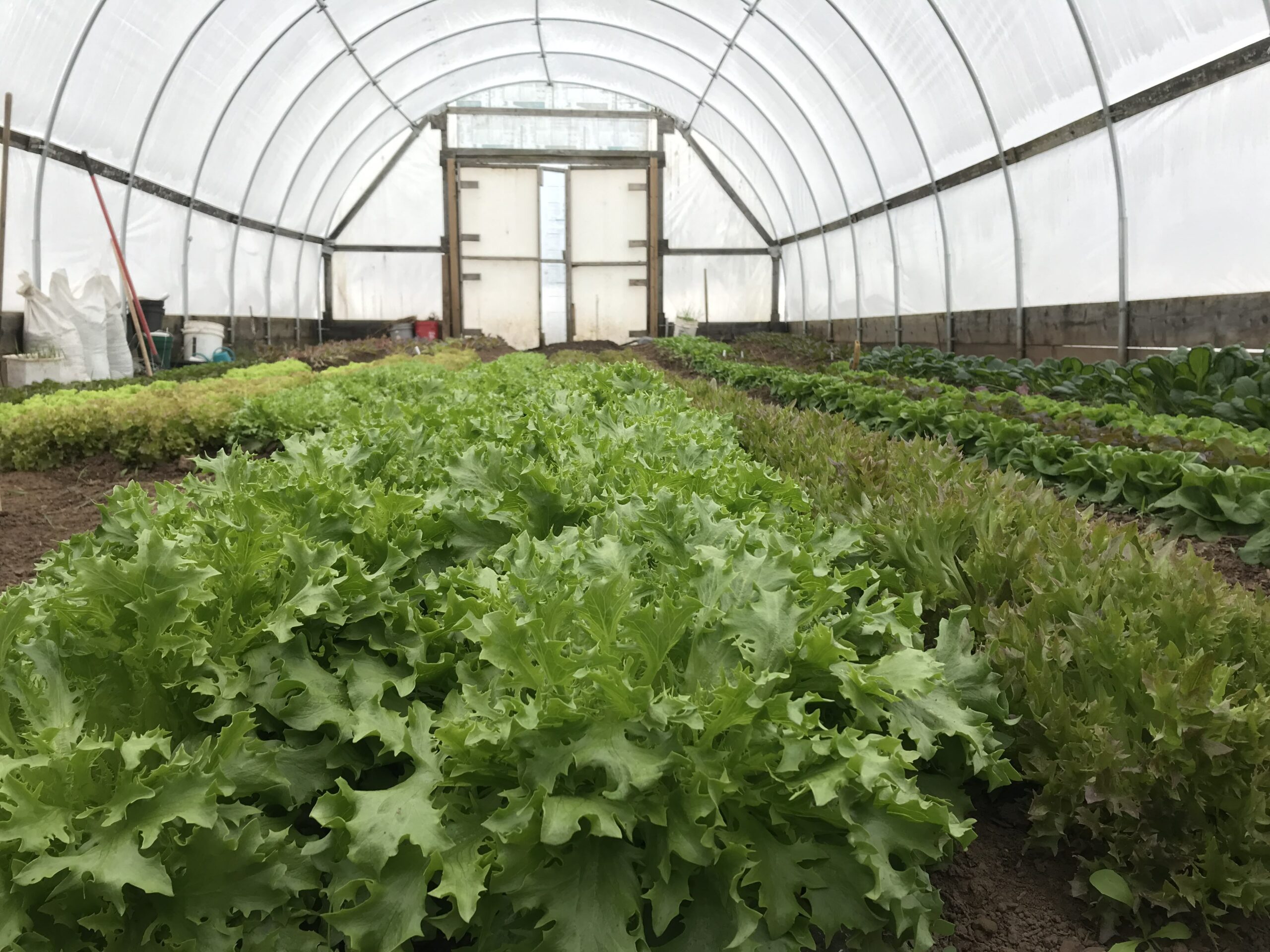 While Jacque and Karen are WEI’s directors, they emphasize that they’re part of a team. “As a nonprofit, we report to a board,” explains Jacque, “and they’ve given us the wings to move forward.” Along with their board, WEI relies on its staff, volunteers, interns, community, and family. In fact, the idea to include a farm as part of WEI came from an intern!

But being a queer, women-owned farm in Chisago County hasn’t always made finding community easy. “Our pathway to a farm wasn’t because we inherited it. It was because we had a real social vision that landed on soil,” says Jacque. “We have a board and people who come together. We’re constantly creating family and community with biologically unrelated people. It’s a different model for a farm.”

Despite being outside the norms of what both a farm and a family are, in 2021, Amador Hill Farm and Orchard won the Chisago County Farm Family of the Year. “There were many families there where you saw the generations,” says Karen. “We were four women who went up and took the award.”

Jacque and Karen have big dreams for the nonprofit, including lessening their reliance on non-renewable energy. “Jacque’s into solar, but I’m really more into geothermal,” says Karen. They’ve also expanded their leadership team to include a third person, and are looking forward to taking a step back.

“We’re trying to edge out,” says Jacque, “but it’s still so much fun!”

WEI will be at the indoor winter market this Saturday, Feb. 26th with greenhouse grown salad greens, root veggies, herbs and more. Support the farm and learn more about organic farming by registering for a workshop or signing up for a CSA (such as their 6-week spring greens share starting in April!) 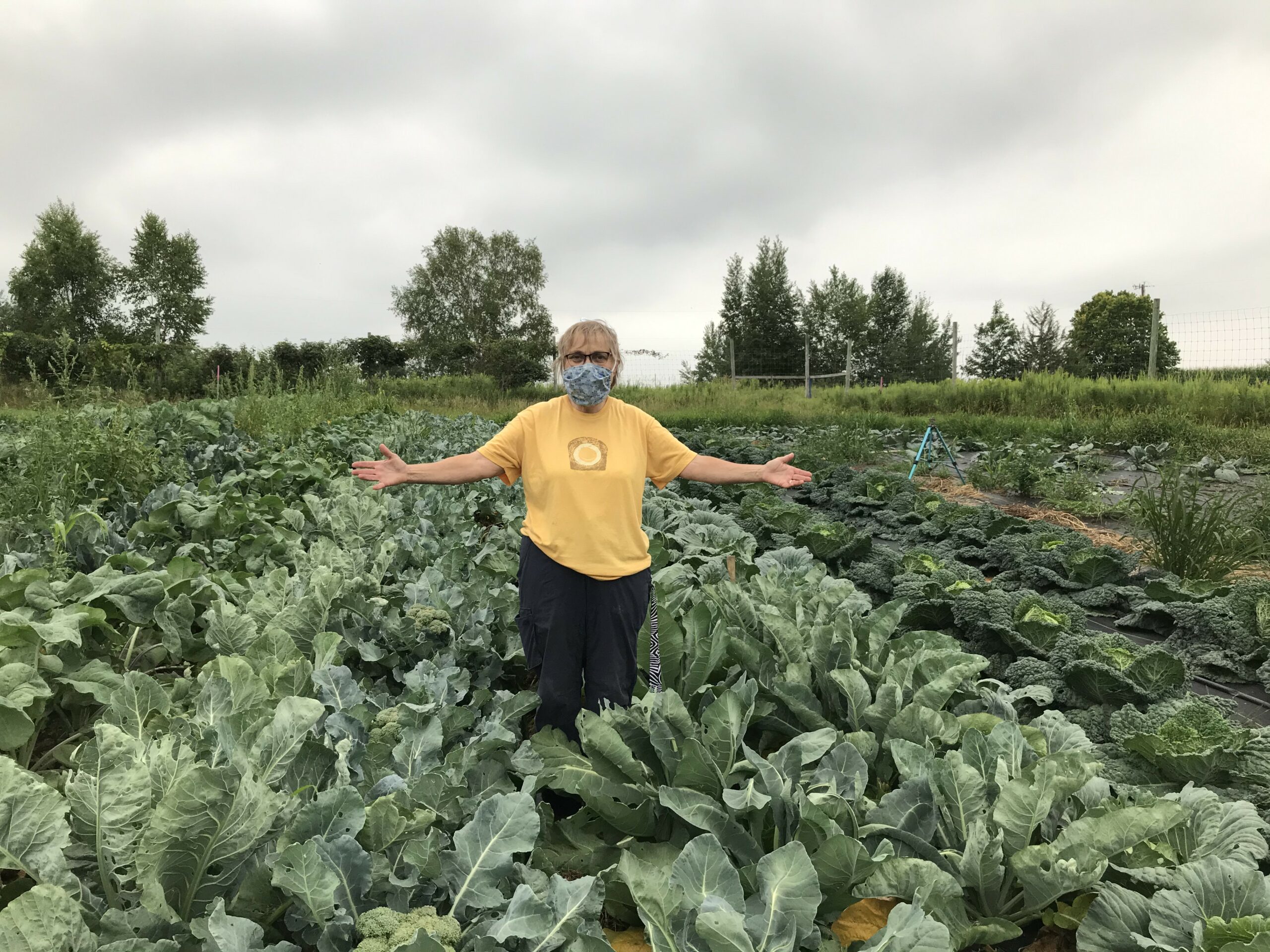 Co-founder, Director of Education, and Operations & Farm Manager of WEI Jacque Zita in a field of cabbages 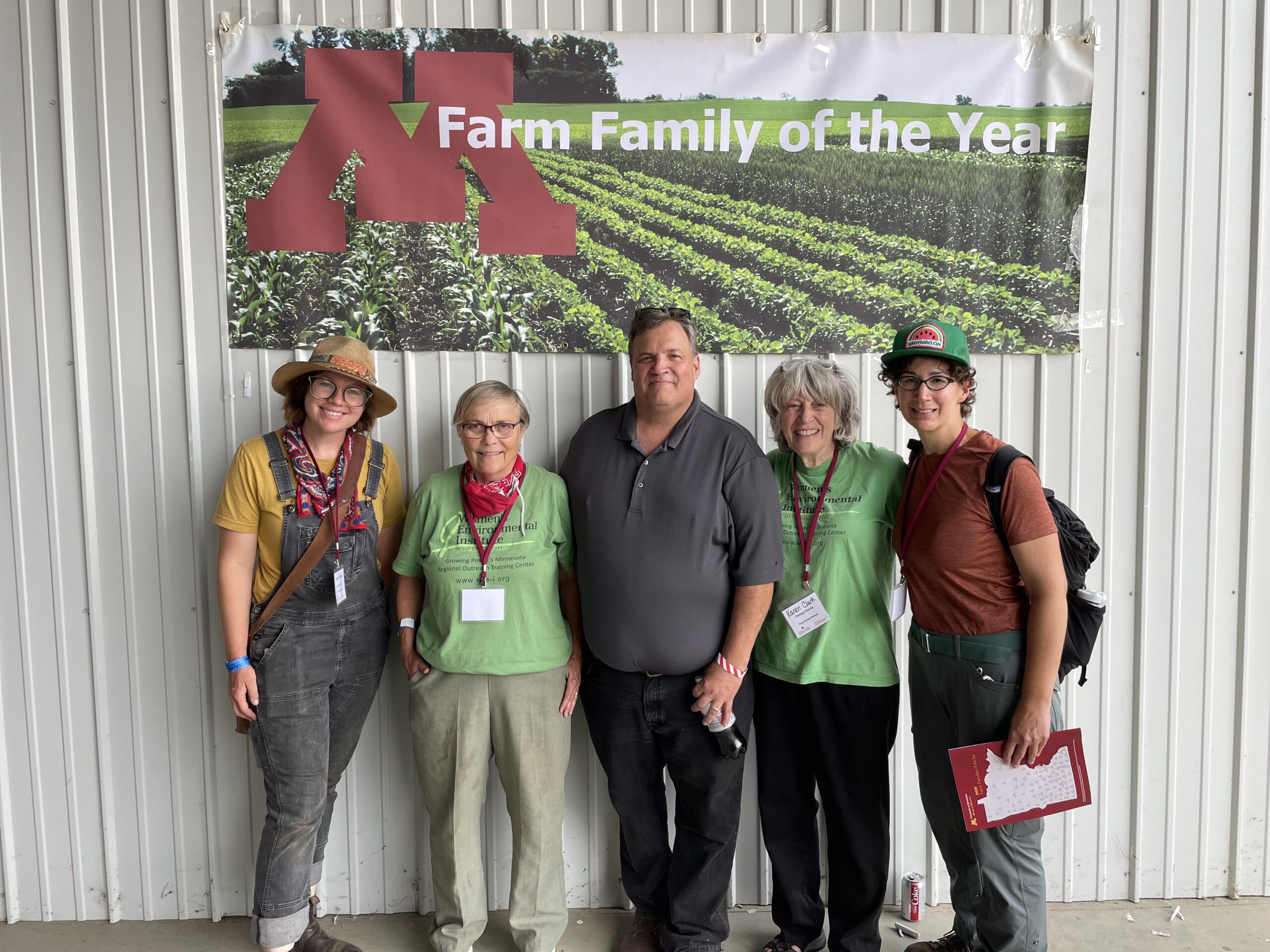 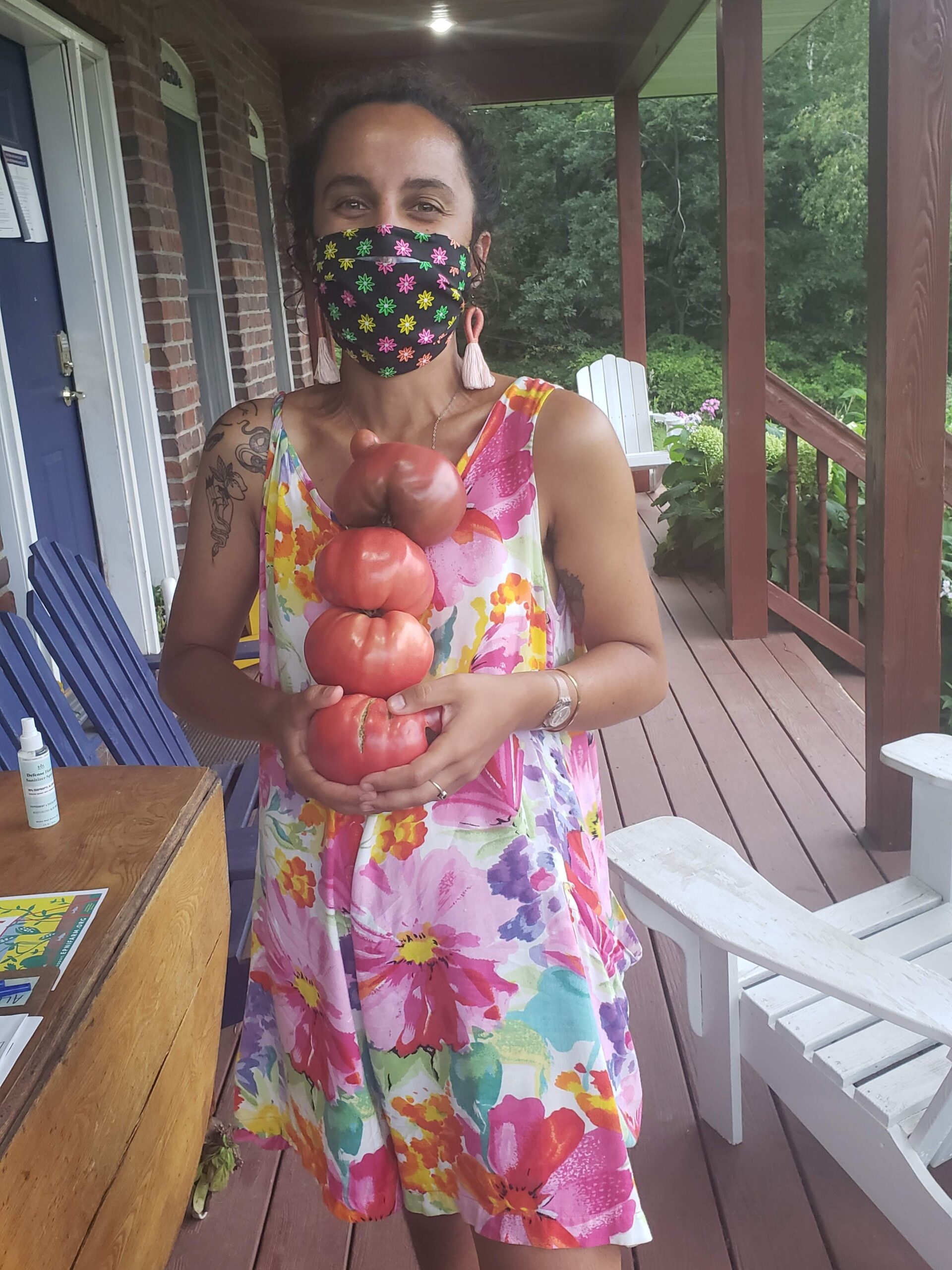 Article author Alia Jeraj, one of the many volunteers contributing to the success of Amador Hill Farm and Orchard at WEI.