Minneapolis, Minn.—A professional chef for most of his life, Jonathan Kaye was confident entering his loaf of whole-wheat sourdough in the Mill City Farmers Market’s 2013 Bread Festival Baking Contest. Though never a baker, his culinary background as a chef and Le Cordon Bleu instructor made him sure he would win bragging rights at the event, which is open to the public at the market’s annual Bread Festival. Sadly, and perhaps predictably, Kaye lost the competition to home-baker and local rye expert John Jacobson. After losing, a fire was lit for Kaye, and he spent the whole year perfecting his starter yeast, combination of flours, and other ingredients, asking Mill City Farmers Market vendors Marty and Darrold Glanville of Sunrise Flour Mill for guidance along the way.

“I was spending so much time at their booth on Saturdays, trying to learn about bread. When they would get busy with customers, I would step in and start doing sales!” Confessed Kaye.

Kaye came back the following year to the 2014 Bread Festival and won first place. Kaye enjoyed the challenge of honing a new culinary craft so much that he decided to open a bakery, Heritage Breads, later that year. Kaye started small with a bread CSA and selling a variety of pretzels, cookies, focaccias, and other breads out of Sunrise Flour Mill’s booth at the market. The 2016 season at the Mill City Farmers Market is Heritage Breads’ first full-time venture, and in October 2016 Kaye is opening a storefront in Minnetonka.

A passion, not only for baking, but for the ingredients that go into bread is what separates Heritage Breads from many other bakeries. Kaye uses only heritage grains sourced from Sunrise Flour Mill and organic and local dairy, produce, nuts, and other extras in his baking.

“It’s an important distinction since using heritage wheat is the main difference between his baked goods and everyone else’s in town–or the country basically,” says Marty Glanville, owner of North Branch-based Sunrise Flour Mill.

Fittingly, Kaye’s motto for Heritage Breads is “Life is too short to eat bad bread.” You can find Heritage Breads and Sunrise Flour Mill next to each other in the train shed at the Mill City Farmers Market every Saturday through the end of October and at the market’s indoor winter market all year long!

On Saturday October 1st Mill City Farmers Market and Sunrise Flour Mill will host their 6th annual Bread Festival from 9 a.m. to 1 p.m to encourage home baking to thousands of visitors. The celebration, and educational session, rather than contest, will be located at the farmers market, which is housed at the Mill City Museum, formerly the iconic Gold Medal Flour Mill. To honor the market’s namesake and beautiful, historic locale, the market is planning a variety of activities including a bread baking showcase open to the public and mini lectures from renowned local bakers including Jonathan Kaye, Darrold Glanville, John Jacobson, and Chris Boles. The market also boasts live music from singer songwriter Jack Klatt, delicious breakfast and lunch, and its distinguished lineup of over 60 local farmers, food vendors, and artists including several other distinguished bakeries like Salty Tart, Solomon’s Bakery, and Baker’s Field Flour & Bread! For more information about the event and participating in the public bread baking showcase visit https://millcityfarmersmarket.org/event/bread-festival/.

Founded in 2006 by acclaimed local chef Brenda Langton and the Mill City Museum, Mill City Farmers Market has earned a reputation for its promotion of healthy eating and sustainable agriculture. Located next to the Guthrie Theater in downtown Minneapolis, the market runs outside every Saturday in October from 9am to 1pm. 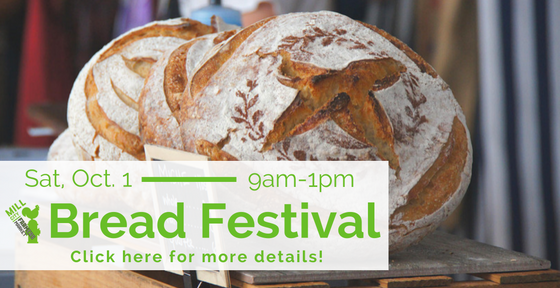